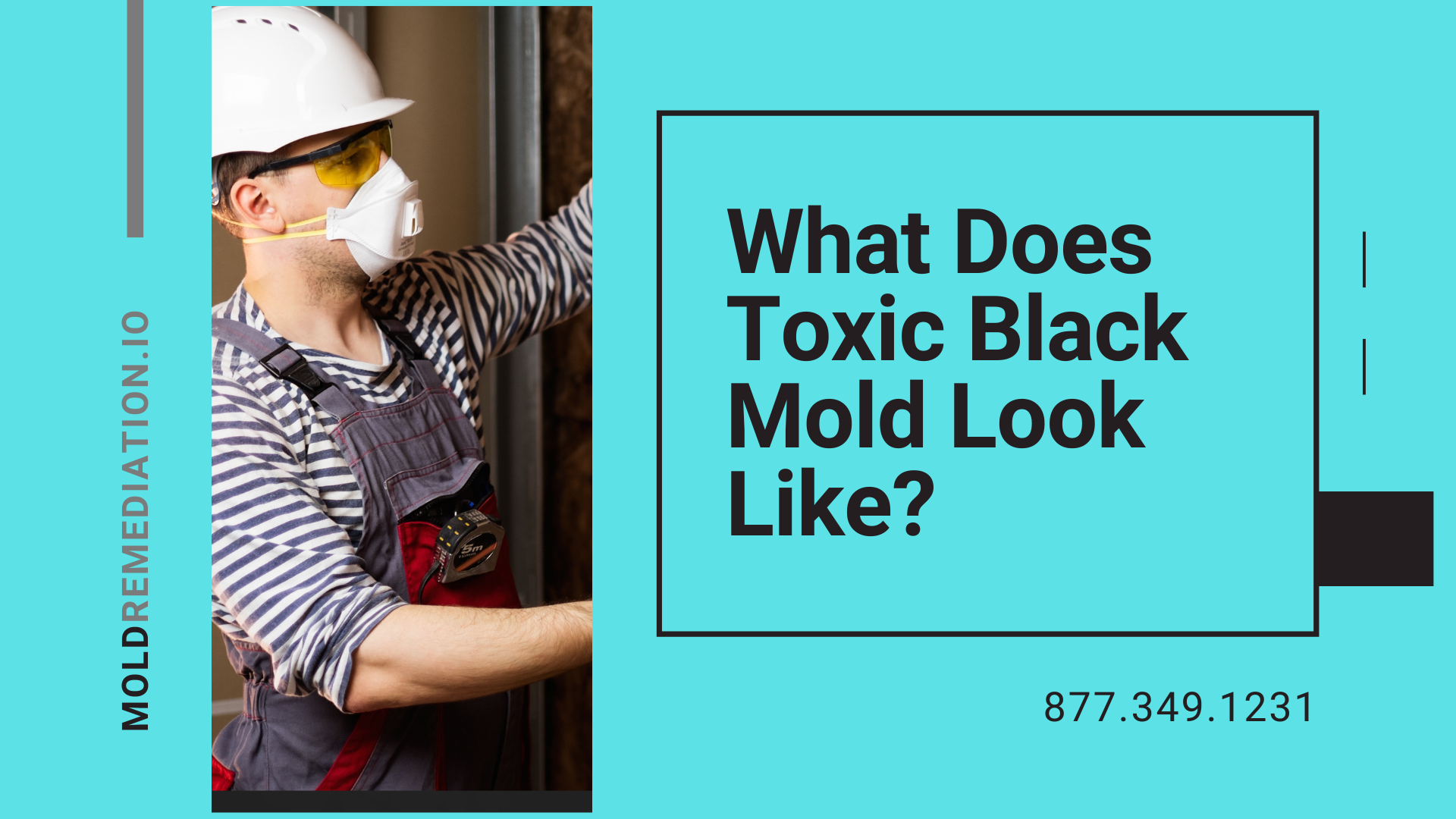 Dealing with mold in your home can be a major struggle — by the time you’ve actually seen it, there’s a good chance it’s already been growing for a while and the outbreak might be bigger than you think. There are many different kinds of mold that can develop in your home, and most of them are stubborn and can be hard to get rid of. However, one group stands out over the rest: toxic mold.

There’s a lot of false information surrounding toxic mold, what it is and how it can affect you. Some people may think all molds are toxic, while others may not know the difference between toxic and non-toxic mold. There are actually several different classes of mold and ways to identify them. What’s more, even most toxic molds aren’t lethal to people with healthy immune systems. That being said, many molds can cause uncomfortable symptoms for anyone exposed to them long enough, which is one reason why it’s important to address an outbreak in your home once you’ve discovered it.

So where do you start? Once you’ve spotted mold growing in your home, your next question is probably how can you tell what type of mold it is and how do you know if it’s toxic. Then, of course, you have to figure out what to do about it. If you’re worried about identifying and handling your mold outbreak, this quick guide can help you figure out what you’re dealing with.

No matter what kind of mold it is, don’t be afraid to call a professional for help. Even if you’re still determined to get rid of the mold yourself, contacting your local contractor for a consultation can be very helpful.

Mold is a type of fungus. Mold starts out as a tiny microorganism called a spore, which spreads by floating through the air and drifting along with the wind. In fact, countless studies have shown that mold spores are virtually everywhere in the air. At any given time, you’re more than likely breathing in a very small amount of mold. However, this minimal amount is harmless and not enough to cause any adverse symptoms in most people.

There are three different ways to classify mold: allergenic, pathogenic and toxigenic.

All in all, each form of mold is different and covers a wide diversity of species. It’s difficult to classify a mold colony just by looking at it, so your best bet is to identify the species of mold first. Once you know what kind of spore you’re dealing with, you can figure out which of these categories it belongs to.

There are countless species of mold that exist, and telling them apart can be challenging. However, there are a few key factors you can look out for when trying to identify toxic mold. 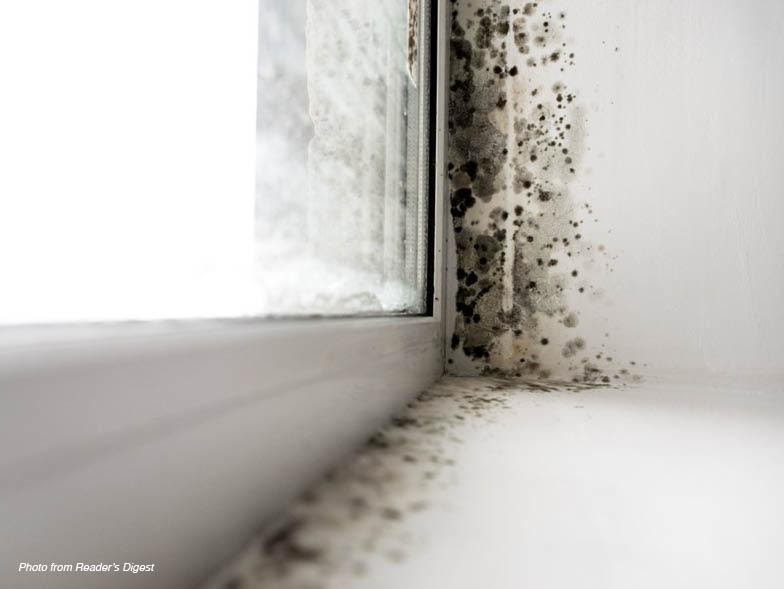 Stachybotrys chartarum typically appears black or extremely dark gray in color. This mold tends to have very round splotches with a speckled appearance. Often, you see darker layers of mold over lighter layers.

Black mold thrives in moist areas, so keep an eye on your kitchen, bathroom and basement. This particular mold is likely to be spotted around plumbing fixtures, under sinks, around bathtubs and toilets, in crawl spaces or attics and around leaky windowsills, such as in this picture.

Sometimes, black mold may have a slightly greenish tinge, as pictured above. Black mold typically isn’t very textured, so you may first overlook it as a stain. Make no mistake, though; mold does not stain — if you have already cleaned away mold from an area and can still see dark spots or discoloration, there is still toxigenic mold on that surface.

In fact, an excellent test to help you classify toxigenic molds is a simple bleach swab. Take a cotton swab or rag, dip it in undiluted bleach and lightly dab a spot of the mold colony. If the mold seemingly disappears but quickly comes back, you are likely dealing with toxigenic mold. This is because potent molds can respond to harsh chemicals by delving deeper into the porous surfaces they grow on. Even after you’ve completely cleared a surface with bleach, those hidden spores can resurface and colonize all over again. 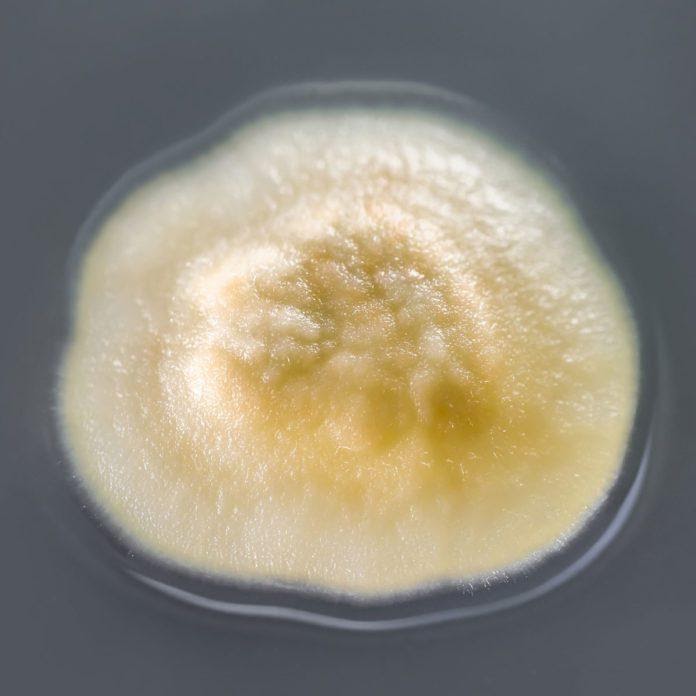 This is another toxigenic mold that sometimes can be found growing alongside black mold. The problem with Acremonium is that its appearance changes over time, so it may be unrecognizable if left unchecked for too long. This mold usually starts out in small colonies that appear very wet, but eventually dry out and become powdery. You may find this mold in shades of white, gray, beige, pink or orange in color. 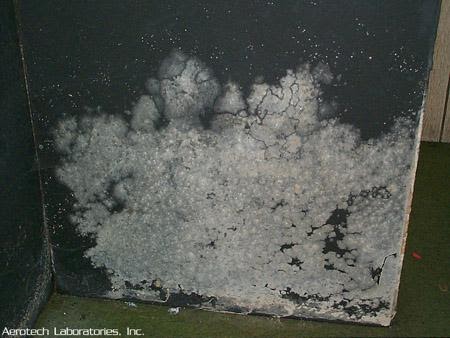 This toxigenic mold may appear a bit cottony, often starting out in shades of white or gray. Eventually, it may fade to brown or even black. Chaetomium is especially common in areas with constant water exposure, such as leaky roofs. It often has a musty odor and may be distinguished by its puffy, cloud-like patterns of growth. Keep an eye out for this mold on damp soil, decomposing plants and high-cellulose materials like wood and drywall. 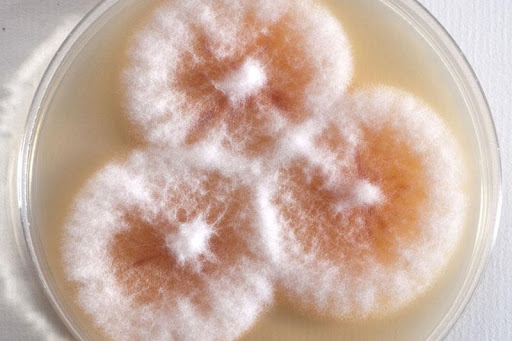 Unlike some of the other molds on this list, Fusarium is both a toxigenic and allergenic mold — it’s capable of both producing mycotoxins and causing allergic reactions in people. In most cases, it should be treated as a toxigenic mold. This mold can frequently be found on rotting foods, where it can quickly and easily spread to other surfaces. Fusarium is recognizable for its distinct white, pink and red hues, as well as its cottony texture.

A surprisingly common type of outdoor mold, Alternaria is closely related to allergenic molds like Cladosporium and Penicillium. It’s easiest to find outdoors in the spring and summer, where it floats along the wind in search of a place to land. Once Alternaria spores make their way into your home, they can release mycotoxins and continue spreading into colonies. This mold is recognizable for its white, gray and brown shades, as well as having a layered appearance. 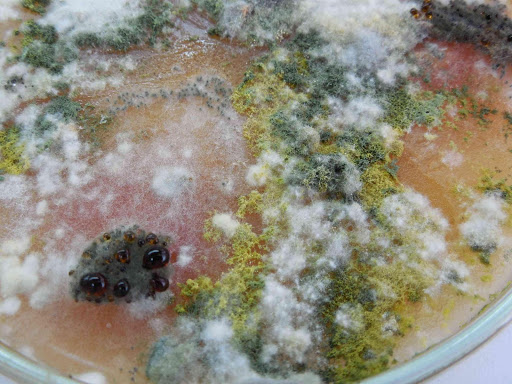 Trichoderma tends to grow on wood, paper and soil; because of this, it’s most commonly found in forests all over the world. It can be identified almost immediately by its various shades of green and fuzzy, moss-like appearance. Keep an eye out for this mold on wallpaper, drywall, painted surfaces and of course, wood. 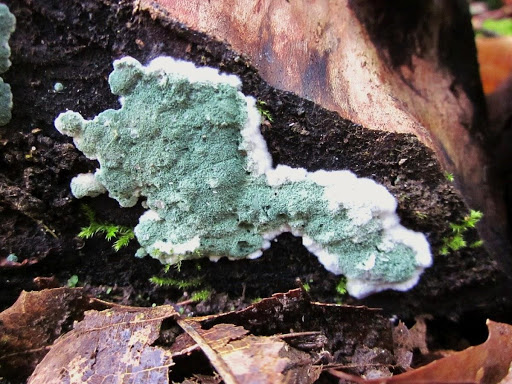 Trichoderma can appear in a variety of shades, though it’s most commonly found in very light, cool green hues. It may also appear very foamy and have an outline of white around the edge of the colony. This is a very textured mold that is easily visible from almost any angle.

This is actually a specific genus of mold in the Mucor family, and while its cousins are relatively harmless, this particular type of mold is capable of releasing mycotoxins that can cause a rare but serious infection called mucomytosis. Mucor molds of almost any kind are most commonly found on decaying foods, so keep a sharp eye on any perishable items in your home and quickly discard any that develop mold growth. 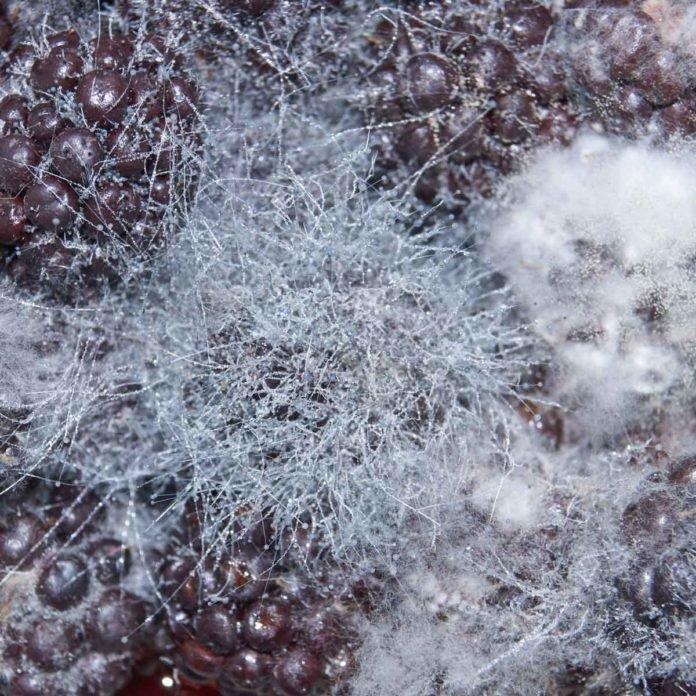 Mucor molds like Apophysomyces are usually fuzzy or fluffy, and come in a variety of white and gray shades. In some instances, they may also appear with tinges of green. Mucor molds may also have black speckles on the surface.

How Dangerous Is Toxic Mold?

Toxigenic, or ‘toxic’ mold, has developed a bad reputation over the course of over two decades. In the 1990s, the Centers for Disease Control and Prevention published a study on several young infants who had developed a serious lung disease; one of the children sadly passed away, while the others went on to recover with treatment. This study noted that all of the children were living in homes with significant amounts of S. chartarum, though the CDC was unable to find a direct link between the mold and the lung disease outbreak.

Nevertheless, the general public concluded that prolonged toxic mold exposure was the cause of the children’s condition. This incident heavily influenced the overall view on mold, inspiring fear in households across the country.

However, the CDC has yet to find a plausible correlation between toxic mold and serious health conditions like lung disease. In fact, a similar incident had occurred and been studied a few years prior to the aforementioned; another group of children in a different state contracted major lung disease, with one of the children passing away while the others made a full recovery. Yet in this group, mold exposure wasn’t even a possible contributing factor in their homes.

In light of these studies and other information collected over the years, the general consensus of the CDC is that toxic mold poses roughly the same health risks as any other type of mold. While it may cause adverse symptoms and possibly infections in people with weakened immune systems, it is extremely unlikely that black mold exposure would be lethal for most healthy individuals.

That being said, prolonged exposure to any kind of mold only increases the risk for negative effects on your health. If you discover or fear there may be mold growing in your home, it’s important to start treating the outbreak right away. In the event that the outbreak is too large to contain on your own, contact a local professional for help.

What Happens When You Breathe In Mold?

Tiny mold spores are always floating through the air at any given time, looking for any warm, moist area to land and colonize. When you breathe these spores in, they don’t typically last long inside your body. They may stick to the sensitive linings of your nose, mouth, throat or eyes and cause discomfort, but your immune system can typically flush them out. This is why you may begin to cough, sneeze, develop a rash or experience watery eyes or a runny nose after prolonged mold exposure; these are all methods your body uses to expel foreign irritants.

In some rare cases, however, mold spores may be able to reach your lungs through the trachea (or windpipe) and colonize. Typically, people with compromised lungs or who have had recent lung surgeries are the highest risk group for this to happen, as there is extra room inside their lungs for the mold to grow. That being said, mold growth in the lungs can typically be treated through oral medications. In some severe cases, surgical removal may be required, but this isn’t always necessary.

Mold has a lot of different names and faces, but handling it all boils down to a few simple tactics: Keep an eye on high-risk areas in your home where moisture and heat are prevalent, pay close attention to the appearance of mold colonies and act quickly if you spot any issues. Once you notice mold anywhere in your house, it’s wise to contact a professional right away to minimize your exposure. Above all, prevention is the best medicine. Ensure your home is well-ventilated, keep your plumbing system in good repair and take care of any leaks before they cause any water damage.

How to Clean Mold in Shower Grout Naturally

What Kind of Vinegar Kills Mold?

How to Kill Mold in Carpet

How to Remove Mold From Bathroom Ceiling With Vinegar

How To Remove Mold From Air Conditioner Ducts

How To Get Rid of Mold On Windows

How to Remove Mold From Drywall Ceiling

How Long Can Mold Spores Live

What to do if you breathe in mold

5 Natural Ways for Removing Mold From Your Home

Hiring a professional mold inspector will give you peace of mind. Being in a position where you are uncertain as to the toxicity of mold in your residence can be extremely stressful.

At moldremediation.io, we pride ourselves on being quick, thorough and effective in how we communicate the mold remediation tests that we perform for our homeowner clients.